Hollywood Costume is a ground breaking exhibition exploring the central role costume design plays in cinema storytelling. Conceived by Oscar nominated Deborah Landis and researched over a five year period the record breaking show was was sold out for the duration of it’s six month London run with over 265,000 visitors. There followed an international tour due to conclude at the Academy Museum in Los Angeles.

The soundtrack to the exhibition had a number of challenges. Deborah didn’t want background music but a captivating score reflecting the emotions of blockbuster movies across the decades.
Visual media was produced with a short loop duration to inform a moving audience however due to the open and reflective nature of the galleries a repetitive theme of short duration could have detracted from the experience.

The solution was a score that evolved over a number of minutes yet had a tempo framework allowing the visual media to repeat yet remain in synchronization with the music. The galleries were also divided into four zones with synchronous but varying orchestrations evolving as the visitor passed through the exhibits moving from romantic Hollywood via action percussion to baroque for the historical sections. This removed the usual audio clashes that occur when numerous soundtracks are played in an open space.

A specially designed sound system with studio quality monitors was installed across the three galleries. In each space the music was mixed on the system to match the gallery acoustics prior to transfer to the show system. This enabled a more theatre like sound quality to be achieved.

In the second gallery where there were a number of interview recordings the soundtrack had neutral mixes in the busier areas morphing into stronger movements where a more dynamic presentation suited. Although there was a common theme across the whole exhibition the design of the music created a linear duration of 90 minutes so the visitor could enjoy an extended view of the displays without repetitive audio content.

An example of how the music was scored to evolve across a gallery can be heard on the audio player (Hollywood Costume transitions). This illustrates how the orchestration seamlessly evolves between zones without clashes.

Hollywood Costume at the V&A 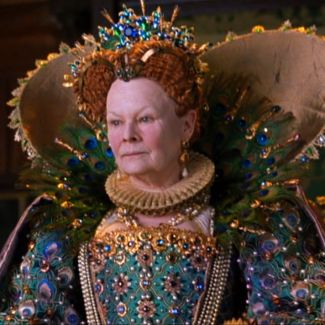 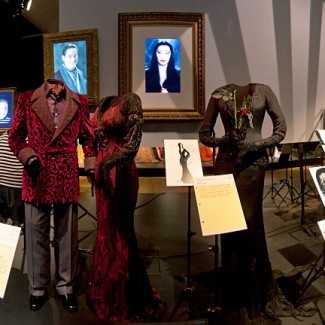